I do hereby assert that atheism is the purest statement in regard to the gods, though I realize that assertion will be antithetical to theists who tend to consider atheism anything but pure. It will also be offensive to agnostics, ignostics, apatheists and spirituals everywhere; still I contend atheism is the purer -ism, due to its complete lack of posturing, doctrine, or even any point. 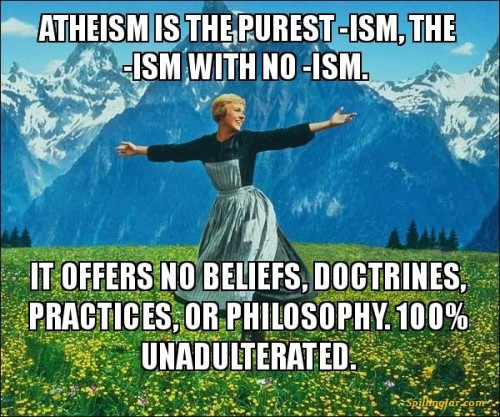 While all other –ism’s (ignosticism and apatheism are -ism’s we’ll explore further in a later post) are not necessarily tainted by corruption and misunderstanding in the way that theism is, they do each posit at least a doctrine, or a teaching, which atheism alone abstains from doing. Atheism is nothing more than a simple lack of belief in the existence of any deities, and as such it is the only unadulterated position in regards to belief in the gods. Atheism -so pure. Remember, you heard it here first.

The ancient Greeks were polytheists, believing in a whole pantheon of gods as well as titans, demigods, troops of lesser gods, local sprites, wood-nymphs, and probably some other shit I’m forgetting. It is from the greek term theos meaning gods that we derive our English word theism –belief in a god or gods, and the word theist –one who believes in the existence of a god or gods.

It’s important to note that this covers the entire definition of atheism. There is nothing more to it at all. Atheists are nothing more than normal people just like everybody else, who happen to not believe in any god(s). It is not a belief. It cannot be a religion. It is barely a position. There’s nothing more to it than lacking any belief in any gods. Very simple, very straightforward, completely nondogmatic, and oh so pure! 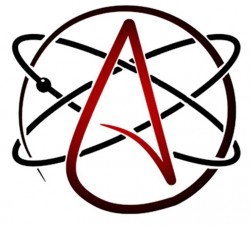 Be it the Christian, Muslim, Jewish, Native American, Hindu, Buddhist, African, Aborigine, Caribbean or other gods, we reject them all, and more. We even reject the vague feel good generic gods of the “not religious, just spiritual.” Atheists reject them all, equally. Theists do exactly the same, in perfect lockstep with atheists, dismissing Zeus, Odin and Osiris without giving them a single thought, reserving faith these days in usually only one deity, typically whichever one into which they are born. Sure it’s become trite, but still quite true, that most modern theists are almost as atheistic as atheists; atheists merely take their lack of belief one little made-up god further.

Some well-intentioned atheists have attempted to tie feminism to atheism, and others argue for softening the image of atheism by instilling humanist principles in general, but there’s no need to conflate the issues or to dress atheism up at all. You needn’t be a feminist or a humanist to lack belief in any gods – you just need to lack belief in any gods. Feminism exists to further equality, humanism exists to spread the tenets of humanism, and atheism doesn’t exist to spread or further anything. Atheism is not a position of activism.

Atheism exists because not everyone believes in gods. It’s a position of simple, unadulterated lack of belief, pure and all-natural. If all the –ism’s of the world were lost and had to start over from scratch, it wouldn’t affect atheism one bit. We’d pick right back up where we left off at -not believing in any gods. Everyone else would have to start making shit up all over again.

For the former believer whose faith suffered from a streak of skepticism, by the time you work your way through all the shit and the lies and the stubborn, heartbreaking stupidity, atheism seems like a safe space, a place to just be, with no ridiculous demands for faith or allegiance to any ideology. It’s important that it stays this way until the cultural need for it has passed. 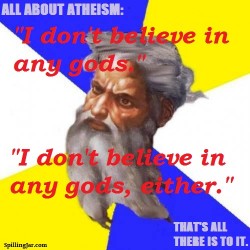 In conclusion here, let me stress one more time that atheism is nothing more than a lack of belief in any god(s). There are no additional teachings, and there is no ideology about it in any way whatsoever. A deep discussion on atheism would resemble something like the following.

“I don’t believe in the existence of any gods.”

That’s as deep as it gets. Anything beyond that isn’t atheism. In those two little lines, we have now covered all the doctrines and mysteries of atheism, in all its glorious purity.