In my previous post on types of atheism, I purposely didn’t speak of Secular Atheists, New Atheists, Antitheists, and Militant Atheists because these types of atheists don’t represent distinctions within atheism itself. There are differences between gnostic and agnostic atheists which involve how they actually define their atheism, which I spoke of in my last post, but there are no such internal distinctions here.

Secularism, new atheism, antitheism and militant atheism are probably best described as social or political positions, which may or may not involve any type of activism. There is a good deal of overlap amongst them. 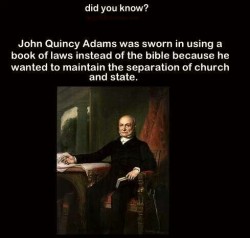 Secular atheists believe in separation of church and state, as everybody should. That’s kind of level 1, and is a given in all of the subsequent levels. It should be understood though that theists can also be secularists, of course, and should be. Religious people don’t want the government deciding their religious beliefs just as much as secularists don’t want religious beliefs deciding our laws.

New atheists are level 2 here, so to speak, and besides generally being secularists, they take the novel approach that we really ought to be discussing this shit. Religion is not sacrosanct, and isn’t due any special respect sparing it the criticism it so deserves, and people ought to not only criticize it but engage religion on scientific terms and disallow it the special status of the metaphysical behind which it has been used to hide. While New Atheists certainly do not shy away from these discussions, and are typically secularists, they are not always antitheist or militant atheists.

Level 3 here -the Antitheists– go so far as to think that perpetuating ancient misunderstandings is bad for both society and often for the individual, and religion and God belief itself needs to be challenged to the point of a natural extinction, or close enough. This is a peaceful revolution, antitheists don’t believe in oppression, persecution or censorship. Most Antitheists are new atheists, using mostly the same method of new atheism -which is just actually speaking up.

Militant atheists are the same as Antitheists, they just tend to do it louder -level 4. Militant atheists is mostly a term used by others against any atheists who say anything ever. It’s an attempt to shut us up, by casting us as “militant” for speaking out, similar to how feminists are often cast disparagingly as militant. 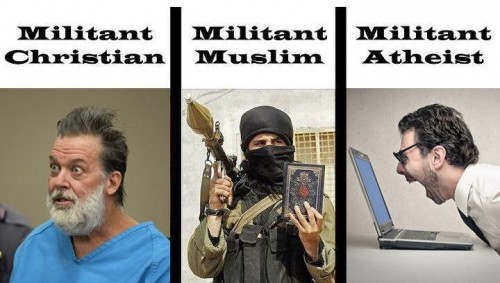 But, screw it, some of us are claiming it anyway. I do not personally choose to use the term, not because I am concerned about being perceived as militant, even in this totally non-militant way, but rather because of the usage of the term in the first part of the last century by the Russian League of Militant Atheists. Even though long defunct, their total ideology does not represent today’s antitheism at all, and the association seems worth avoiding.

None of us -not secularists, new atheists, antitheists, militant atheists, nor atheists in general- categorically dislike theists themselves, just religion, or theism. It’s rather like hate the sin, love the sinner. We dislike theism, but we love theists just fine. It’s not you, it’s your religion. It actually hurts us to see you this way, like seeing a loved-one hooked on meth or something.

Unlike the more pragmatic secularists, who have organizations with goals and take actions of measurable effect, new atheists, antitheists and militant atheists have no agenda, just a sort of vague, pie-in-the-sky vision, and no real plan for how to get there. Calls for universal and improved education and protection and practice of free speech around the globe is all we really have in mind. We think it will get us there, if we can get that far. 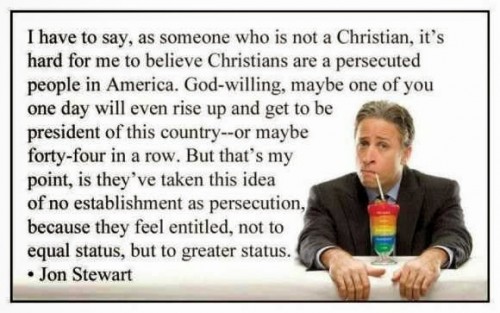 This is why secularism has been painted as bad, a liberal disease, communistic, evil, of the devil, etc etc. They hate it because it strips Christians and Christianity of the ability to lord it over everyone else. Take that shit back to your church, the rest of us didn’t sign up for it.

Once again, however, let me reiterate that atheists are never all anything, except for lacking a belief in any god(s). Most are probably secularists, if asked, but frankly I think even theists would have enough sense to see how absurd it is that in fact even some (too many) atheists say “oh just leave them all alone and let them biblically legislate our lives for us and even kill us off in far away places cause gosh we don’t want to seem militant!”

Fuck that, yet in another example of how illogical and how conditioned the human mind can be, that actually happens. There are actually atheists out there who don’t understand that theists kill us whenever they can get away with it, and who think we should all just shut up. Fortunately, once it is explained to them, they generally begin to understand, and as I mentioned before, there are also actually theists out there who do understand the dangers of mixing religion with government, and they fight with us.

Though most atheists are secularists at heart at least, most do not go so far as antitheism. Some still say “oh believing in ancient misunderstandings is good for the peasants” or something similar, but many more just don’t fully understand the ramifications and/or aren’t quite prepared to make annoying asses of themselves. Most atheists are fine with religion, as long as it doesn’t affect their personal lives.

It should also be made perfectly and loudly clear that many atheists dwell in parts of the world where they cannot even express their atheism, or even agnosticism, or a single doubt, on pain of death. I’ve encountered people afraid their own families would kill them if they knew. Their plight helps motivate some of us to speak up twice as loudly.

It is good when a Muslim leaves behind all of the ancient misunderstandings of their people, isn’t it? It is equally good for us in the west, and as the older cousin of our fellow Abrahamic dupes, we probably ought to lead the way.