Agnosticism – a position that knowledge of any god’s existence or nonexistence cannot be known.

Technically, by its definition, agnosticism has nothing to do with theological belief, as we discussed in the previous post. It deals rather with what can be known regarding the god(s), but there’s more to it than that which seems lost with time. The term has been misused from its conception, and all the abuse has resulted in a word which today entirely misses the original point of itself and is diluted almost to near meaninglessness. While our current definition of agnosticism is valid and acceptable, it may be a bit too narrowly defined to really deliver the full message of Thomas Henry Huxley’s original vision. “Agnosticism is of the essence of science, whether ancient or modern. It simply means that a man shall not say he knows or believes that which he has no scientific grounds for professing to know or believe.” Here we see that agnosticism was not intended as a position of belief or unbelief or anywhere in between; nor was it limited to a mere statement of what can be known regarding the god’s/gods’ existence. Agnosticism as conceived of by Huxley was essentially a position of demanding evidence –“the essence of science.”

Still in Huxley’s own words, “That which agnostics deny and repudiate, as immoral, is the contrary doctrine, that there are propositions which men ought to believe, without logically satisfying evidence…” Agnosticism is not a mere fence-sitting position; it is diametrically opposed to the idea of unmerited faith in anything as any sort of virtue or form of reason.

A bit more from the Huxter, “Agnosticism, in fact, is not a creed, but a method, the essence of which lies in the rigorous application of a single principle. That principle is of great antiquity; it is as old as Socrates… it is the fundamental axiom of modern science.” (emphasis added)

And there we have the lost lesson in agnosticism. The underlying point of agnosticism is not to kind of believe, not to assign to one’s faith a lesser, open-minded, midway kind of take on it, and not to intellectually know it’s bunk but choose to cling to it anyway. Nor is it the point to rest one’s convictions in uncertainty. The point is to brush faith off entirely where it is not compelled by sufficient, scientifically testable evidence.

Though malicious misusage of the term began almost immediately, it continued on probably with good enough intentions. At a time when atheists were considered to believe in the assertion that there are definitely no gods, atheists as defined at the time held an unjustified belief themselves, though in actual practice that may have been less than completely accurate.

Since then the subject has evolved, and atheism is no longer considered to mean a belief in the premise that no gods exist. You can check your dictionaries, a mere lack of belief is all that is required to be an atheist these days. Of course, as before, people must be hesitant to use the hated atheist label.

Still, let’s not chalk up misuse of agnosticism automatically to cowardice; it may be a well-intentioned temptation to describe one’s self as an agnostic, since announcing one’s atheism tends to invoke hostility and shut down conversation. Saying one is agnostic says much more than just saying one is an atheist, and offers some breadcrumb to the increasingly ambivalent listener. As an atheist, one might be an atheist due to some number of reasons – the worst of which people are often quick to assume, but as an agnostic, one is an atheist because sufficient evidence to convince one otherwise has never been presented. That is, at least, a clue for the unwitting, if they will take it.

Unfortunately that last part seldom gets effectively transmitted in casual conversation, and personal demands for evidence are hardly mentioned in the dictionary definitions of agnostic. The label is spread, a vague idea that a god or gods may or may not exist –“it’s all improvable,” and just a couple steps removed from the original good intention stands the spiritual person touting a universal god, chakras and quantum healing, all while claiming to be an agnostic.

Bertrand Russell understood the problem as far back as 1947, when he penned a pamphlet attempting to clarify the agnostic and atheist positions. “On the other hand, if I am to convey the right impression to the ordinary man in the street I think I ought to say that I am an Atheist, because when I say that I cannot prove that there is not a God, I ought to add equally that I cannot prove that there are not the Homeric gods.”

The point of agnosticism has been stripped down to “nothing regarding the god(s) can be proven,” taken by many to mean “my god cannot be disproven,” and this made a mere license to believe in anything –precisely the opposite of the point for which Huxley so eloquently argued. 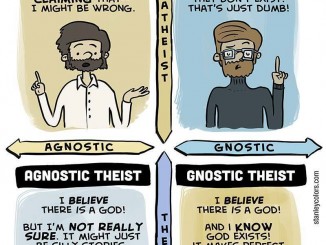 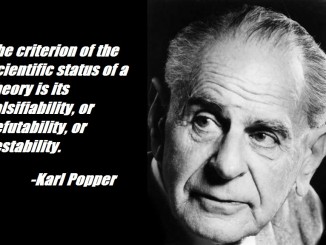 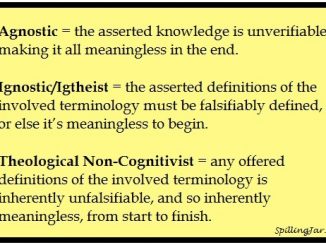